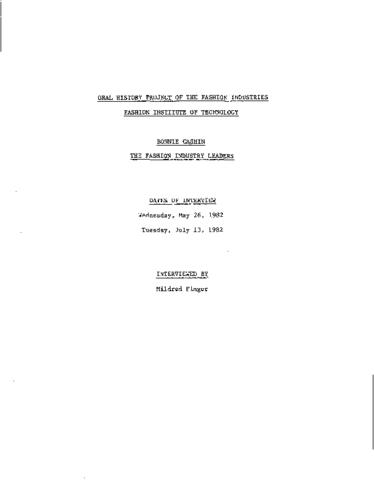 Bonnie Cashin was born on September 28, 1915 in Oakland, CA. As a child, Cashin was given scraps of fabric to play with and soon began designing with the scraps. Even before graduating High School, Cashin was hired to design costumes for a ballet company in Los Angeles. When the manager of the ballet company moved to New York, a 19 year old Cashin went along. Her first fashion designs were for the clothing manufacturer Alder & Alder. Once the United States entered the second World War, Cashin was hired to design uniforms for women in the armed forces. The fabric restrictions, however, proved too limiting for Cashin, who, soon after being hired, moved to Hollywood and began designing costumes for 20th Century Fox (the fabric restrictions for costume design were less strict). Cashin moved back to New York in 1949 and three years later, won her first Coty award. Cashin's sportswear designs were innovative and effortlessly chic. "Bonnie Cashin Designs" opened in 1952 while also designing for Philip Sills, a venture that lasted two decades. Bonnie Cashin is also the genius behind Coach's famous handbag clasp. At Coach, Cashin designs many classic handbags, including shoulder bags (some with removable straps) and a handbag inspired by paper shopping bags. Cashin worked at Coach from the early 1960s to 1974. In the early 1970s, Cashin expanded into knitwear, focusing on designs that were knitted to shape, rather than sewn piece by piece. Cashin won her second Coty award in 1968. Four years later, she was inducted into the Coty American Fashion Critics Hall of Fame. Bonnie Cashin passed away on February 3, 2000.

Bonnie Cashin (1907-2000) is considered one of the most significant pioneers of designer ready-to-wear, more commonly called sportswear, in America. Among the most critically acclaimed and commercially successful designers of the 20th century, Cashin was revered for her intellectual, artistic, and independent approach to fashion. Treating clothing as collage or kinetic art, she sculpted designs from luxurious organic materials including leather and mohair, both of which she first championed as appropriate for high-end fashion, as well as tweed, cashmere, and wool jersey. She initiated the use of industrial hardware on clothing and accessories, most famously with the brass toggle that she incorporated into her handbag designs for Coach, the company for which she launched a women accessories division in 1962. Favoring timeless shapes from the history of world clothing, her staple silhouettes included ponchos, tunics, Noh coats and kimonos, all of which allowed for ease of movement and manufacture. Cashin is also credited with introducing the concept of layering to fashion.