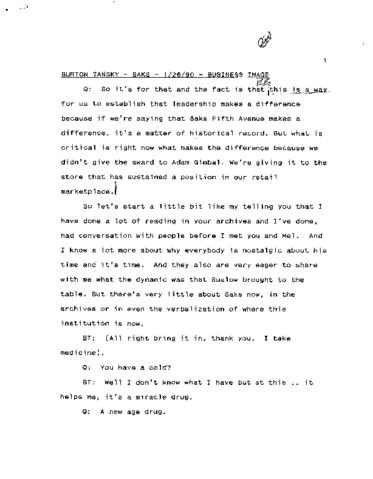 Burton Tansky was born on November 30th, 1937 in Pittsburg, PA. After graduating from University of Pittsburg in 1961, Tansky worked as a buyer at department stores Filene's and Kauffman's before moving into an executive role at I. Magnin's and then working as president and CEO of Saks Fifth Avenue from 1980 to 1989. Tansky became the CEO and Chairman of Bergdorf Goodman in 1990, a position he still held at the time of this interview. Tansky has received a number of industry awards, including the Superstar Award from Fashion Group International in 2006, a Visionaries! Award in 2005 from the Museum of Arts and Design, the 2004 Gold Medal Award from the National Retail Federation, and, in 2002, appointment as a “Chevalier de la Legion d'Honneur” by the French government for his promotion of French-made merchandise in America. This interview was conducted by Estelle Ellis, founder of Business, Inc., a business market research firm.