item 9 - Conversation between Grace Kelly and Vera Maxwell, with an interview of Kelly by John Touhey 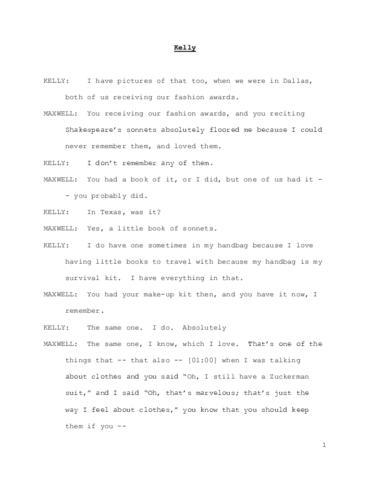 Vera Maxwell was New York City in 1901. She trained as a ballet dancer and joined the Metropolitan Opera Ballet in 1919. In 1924, she married Raymond J. Maxwell and shortly after began her first foray into the fashion world as a model for a wholesale company, eventually starting to sketch, design and model her own clothes in 1929. By 1936 Vera's designs were receiving positive reviews in the fashion press and her freelance collections were receiving attention in New York. She was also designing for 7th Avenue firms such as Adler and Adler, Glenhunt and Max Milstein. Vera opened Vera Maxwell Originals in 1946 and became known for her classic separates and suits, dresses teamed with jackets, print dresses, Chesterfield coats and Wraparound jersey dresses. During the war years, she gained a reputation for her practical sense, which was evident in the one-piece overalls she designed for female factory workers. Her simple lapel-less suits were spare and gave no hint of having been stripped of their decorations, which demonstrated her skill at overcoming the fabric rations of the time. Other innovations Vera became known for were her desire to design for women of short height, or without a model's figure and for women whose jobs took them beyond their desks. In 1974, she designed a "speedsuit" made of jersey with an elasticized waist, which could be pulled on in just 17 seconds. Vera closed her business in 1985, eventually passing away in January 1995.

Grace Kelly was an American actress. She married Prince Rainier of Monaco in 1956, becoming Princess Grace of Monaco.