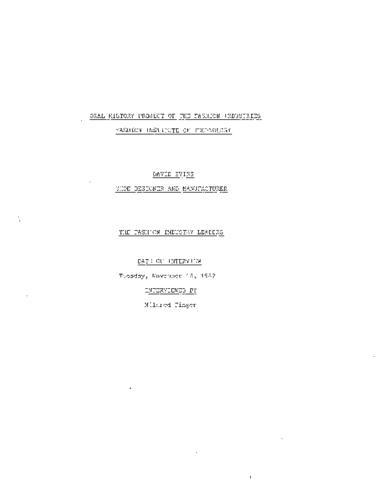 David Evins was an English shoe designer and known as the "King of Pumps." He studied illustration at the Pratt Institute and was an illustrator for Vogue prior to being a designer. His specialty was in stylish yet comfortable shoes and garnered a clientele of female film stars and political figures.

David Evins was born in London around 1906. He and his family moved to Brooklyn 16 years later. He graduated from New York University and completed some graduate work at the Pratt Institute. He began his career as a fashion illustrator, working for Vogue just after WWII. Evins practically stumbled into shoe design: after taking liberties when drawing a pair of shoes, his editor fired him, stating that if he liked designing shoes, he should do it for a living. Evins started working as a pattern maker as well as designing for different manufacturers. In 1947, he opened his his own factory with his brother in New York. A year later, Evins was given a Coty Award for creating the "shell pump," a heeled shoe with a low cut top that highlighted more of a woman's foot. Evins acquired a factory in France in the early 1950s and began producing more comfortable and lighter-weight shoes. This lead him to become a favorite of movie and theater actresses. Perhaps the most memorable "Evins shoe moment" on the silver screen came in 1955 when Marilyn Monroe stepped on a subway grate, letting her white dress billow up in the subway breeze (her white strappy pumps were designed by Evins). David Evins passed away on December 28th, 1991.