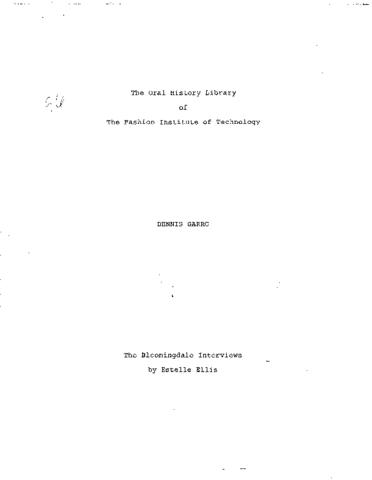 Dennis Garro served as the Senior Vice President / General Manager of the Men's division at Bloomingdale's as well as the Boys division and Young World (kids) division. He worked with Macy's San Francisco for nine years prior, and was with the Macy's organization in Kansas City for a year and a half before that. His career first began in 1970 at Abraham & Straus. His work with the men's division began when he moved to Macy's San Francisco. While at Macy's San Francisco, Garro also worked in general ready-to-wear before becoming the regional director of stores. At the time of this interview, Garro had been reporting directly to Marvin S. Traub at Bloomingdale's for roughly one year. Garro retired from Bloomingdale's in 1989, after roughly four and a half years with the company. This happened amidst the pending sale of Bloomingdale's.

Audio is rather quiet, a lot of "air noise" requiring high colume to be audible

This was originally part of a larger recording that includes the Alan Reyburn interview.