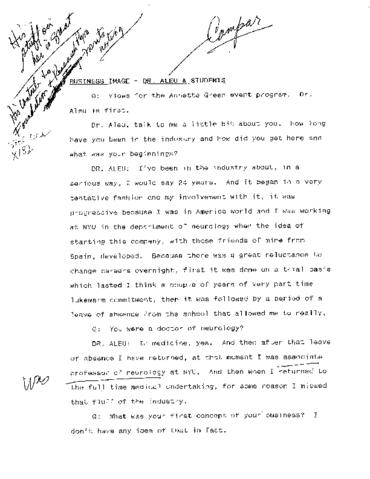 Dr. Fernando Aleu was born in Spain. He moved from Spain to the University of Iowa. While working at NYU in the neurology department, he and his business partner started a company called Compar. His business was created in November, 1969 as a way to distribute the products of Paco Rabanne, a friend and designer. Since then, the compnay has made many other agreements with designers, such as Carolina Herrera. In 1970, a fragrance his company produced, Calantra, was a potential nominee at the Fragrance Foundation's award ceremony. This was Aleu's first interaction with the Fragrance Foundation and Annette Green. Around 1976, he was offered as position as president of the Fragrance Foundation, partially due to his relative neutrality in judging other's fragrances. He was president for about 14 years, although stepped down for a period of time early in his presidency. He later held the position as the president of the Fragrance Foundation Research Fund.