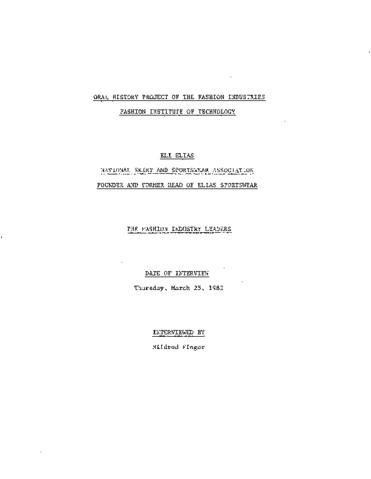 Eli Elias was born in Rochester, New York on August 2nd 1912. In 1929, Elias moved to New York to work at his uncle's clothing manufacturing factory. Two years later, he became a partner Maybro Sportswear company. Elias left the firm in 1934 to start his own fashion company, Elias Sportswear. Elias worked as president until 1979, passing the company along to his son Richard. That same year, Elias became president of the New York Skirt and Sportswear Association. Elias sat on many fashion council boards, including the Garment Industry Development Corporation, the Educational Foundation for the Fashion Institute of Technology, and the Council for American Fashion. Eli Elias passed away in September of 2004 at the age of 92.