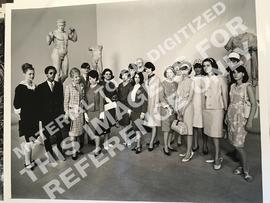 2019: There were no notes related to the reasons why undated photographs were arranged in folders by decade. Some photographs bore evidence that they'd been filed in the folder of the incorrect decade (e.g. fabric and styles that did not exist until the 1960s or 1970s were in a folder dated to the 1950s). Whether or not this is the order in which the photographs were received, such imagery will not be discoverable by researchers who look in folders titled with different decades. I've renamed the folders to indicate that the material inside may be misdated, and moved photographs that were very obviously in the wrong decade to a new undated folder. -Samantha Levin