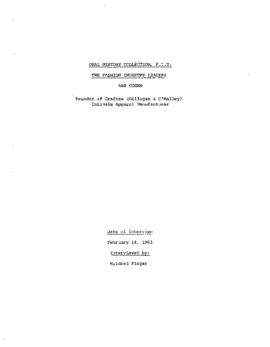 Documents describing the planning, formation, and implementation of various oral history projects administrated by the FIT Library and other FIT departments. Includes meeting minutes, class documents from John Touhey's oral history studies, histories, and documentation. Bulk of the content relates to the Oral History Project of the Fashion Industries series within the Oral History collection.

In this interview, Mr. Kresch recalls his 95 years of life, including his childhood in Brooklyn, what inspired him to get interested in art, his student relationship with the artist Hans Hofmann, his time in the air corps during WW2, and his time at FIT, Parsons, and Pratt working as an art professor.

Alfred Sloan discusses his life growing up in NYC, his time in the service, and how he got to FIT.