This series consists of 14 oral history interviews, which discuss the history of Bloomingdale's, President Marvin Traub, as well as the store's current status and future plans. Interviews were conducted between November, 1986 and January 1987 by Estelle Ellis.

Includes the papers and presentation delivered at the 2016 Symposium The names of the presenters and the title of their presentations contained in this folder are: Rebecca Love "Economic Crisis and the Bloomingdale's Experience" ; Samuel Neuberg "Dressing for Revolution: An Analysis of Dress in 'The Memoirs of Madame de la Tour du Pin'" ; Laura Donovan "New Women, New Clothes: Louise Dahl-Wolfe, Fashion Photography, and World War II" . 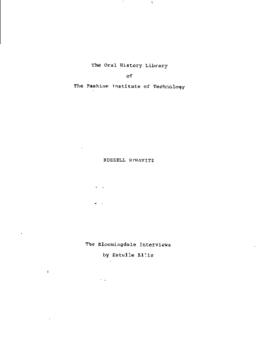 Jeannette Jarnow, former Chair of the Fashion Buying and Merchandising Department (FBM), discusses the small and intimate nature of FIT when she joined in 1956. She discusses the founding of the school by Morris Haft, Virginia Pope, and a handful of fashion industry insiders. She then describes the birth of the FBM department thanks to an endowment by Bergdorf Goodman as well as close relationships with Lord & Taylor, Abraham and Strauss, and Bloomingdale's. Jarnow touches on influential people from each department store and then goes into the student demographic make-up of the 1950s. Jarnow describes the changes at FIT over her 38 year career such as the former dress code. She then describes fundraising events and field trips to wholesalers and retailers. Jarnow also remembers famous speakers coming to the school such as Yves Saint Laurent and Givenchy. She recalls that Virginia Pope used to take students to the opera and other public events to experience fashion and culture. Jarnow briefly touches on her time as Chair and describes the publication of her book, “Inside the Fashion Business.” Jarnow also emphasizes FIT’s international reach and the vast array of career options alumni have experienced. Finally, she mentions the Oral History of FIT taken by Mildred Finger which was housed in the library.