Volume 10 is indicative of the diversified range of Mainbocher's designs and clientele. He created suitable eveningwear for both the WAVES and society women. In October 1948, he debuted a full-dress evening uniform for the WAVES--the first ever designed officially for women members of our country's military service. It was a three-piece ensemble of navy blue sheer wool and white silk, consisting of a jacket, blouse and skirt. The uniform reflected the "New Look" proportions, and also included a hat and navy envelope-shape evening bag with a single gold button fastening designed by Koret. He also updated the WAVES' daytime look from 1942 by lowering skirt lengths from a war-time seventeen and a half inches to a modified "new look" clearance of 13-14 inches. It was covered in an array of magazines from Vogue to Time to Beta Theta Pi, the University of Chicago chapter's literary magazine. The same year, he also designed gowns for some of society's most prominent women for the Gibson Girl Ball, which took place on December 20, 1948 at the Hotel Plaza. He was inspired by his research on the Gibson Girl era, as evidenced by the huge, draped leg-of-mutton sleeves that appeared in his collection. Many of "the belles of the ball," including Mrs. Charles Dana Gibson, Mrs. Vincent Astor and Mrs. John C. Wilson were featured in editorial spreads wearing their Mainbocher gowns. Finally, the volume contains coverage of Mainbocher's cardigan. The old sweater was fashionable for spring, and the designer was credited for introducing the dressy evening cardigan several seasons prior. 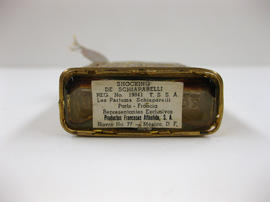 View of bottle bottom with label

Female figure in a pleated skirt, knit top, polka dotted scarf and hat. Standing facing back in a country inn restaurant setting. Black and white ink; Signed front and back.

Untitled ("To Alex from Eric"), undated

Untitled (Female figure in a bouffant skirt and black top), circa 1950s

Female figure in a bouffant skirt and black top, on reddish paper; Signed.

Untitled (Triptych of children in their Sunday best), circa 1950s

Triptych of children in their Sunday best; Color: charcoal and watercolor; Signed.