This folder contains 10 sketches of evening gowns. Hattie's signature color "Carnegie Blue" is represented in a few of the color choices for the gowns.

This series contains a menswear sketch for Hattie Carnegie Inc.

The Roundtable of Fashion Executives records 1960-1969

This folder contains minutes and membership lists for The Roundtable of Fashion Executives.

The Roundtable of Fashion Executives

The Roundtable of Fashion Executives records 1994-1999

The Roundtable of Fashion Executives

This folder contains eleven 9 x 12 3/4" pencil and watercolor sketches of dresses, hats and coats, and one pencil sketch of the floral motif seen in one of the dresses' textiles.

This folder contains ten various sized mixed media sketches (ink, gouache, pencil and watercolor in various permutations) of dresses, hats and coats. Two sketches stamped "S.A.R.L. Carven, 6 Rond Point des Champs-Elysées" and "Made in France", one sketch stamped "Hermes seiilier" and one other stamped "Made in France" with no futher attribution.

This folder contains three black and white 8x10" photos of the same millinery design, along with press releases. 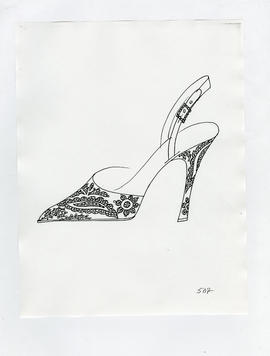 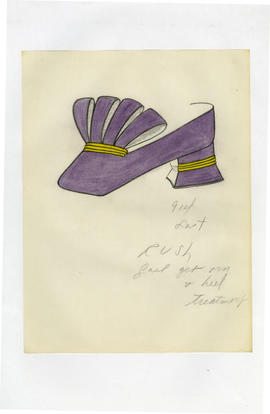 Sketch for I. Miller

The Andrew Geller sub-series contains a total of 756 original color sketches in 6 folders. The year information is not available in this subseries. Thus, the time range of it is also supplied according to Baghsarian’s biography history. In this subseries, the shoe types include pumps, flats, sneakers, sandals and boots.
The sketches in this sub-series feature women day-ware integrating comfort and youthfulness. The predominantly used element is still the bulky heels, which is merged naturally into the design of pumps, pump sandals and flats. Besides that, other decoration elements presented in this sub-series include the use of vibrant colors, metal buckles and strong color contrast.

The Arsho for Shoebiz contains a total of 594 sketches in 7 folders. As another subordinate product line in Shoebiz, Arsho for Shoebiz aims at a younger customer group with a lower market price. As the first product line with Ashro’s name, it bears a special meaning in Arsho’s career.
The sketches of this sub-series are original. This product line contains women footware for all occasions. One feature contained in this sub-series is the hand-woven shoes. Recalled by Arsho, during shoebiz period, these delicate hand-woven shoes were manufactured by their French cooperators, which were very popular among their customers at that time.

The Stuart sub-series contains a total 5344 of sketches in 36 folders. Compared to Stuart Weitzman, most of its sketches are original, and a great part of which are decorated with watercolor. As a subordinate product line in Stuart Weitzman, it is aimed at a younger consumer group and designed to be dressier with a lower price range. Similar to Stuart Weitzman line, Stuart contains shoes types for various occasions in all seasons.

The principle of practicality also succeeds in Stuart line as well. Just as Arsho states that “shoes are designed for walking, not for displaying or fashion show”. Most of shoes styles in this sub-series are from flats to mid-heel height.