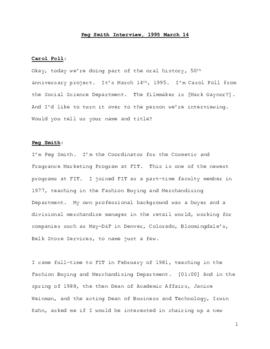 Coordinator for the Cosmetic and Fragrance Marketing Program at the time of this interview, Peg Smith joined FIT as a part-time professor in the Fashion Buying and Merchandising Department (FBM) in 1977. She came with a background in buying and merchandising for large companies such as Bloomingdale’s. Smith came on full-time in 1981 and, in 1988, was offered chairmanship of the burgeoning 4-year Bachelor of Science degree in Cosmetic and Fragrance Marketing. She discusses the history of the program. Dean Jack Rittenberg asked Hazel Bishop to found the program and she formulated the original curriculum which was primarily science-based. Smith details close working relationships with the Industry that have helped the program thrive, especially thanks to the efforts of Annette Green, who formed the Action Council for their department. Smith talks about the benefits of their mentorship program, which was the first at the college. She discusses various funding sources such as a luncheon during Fragrance Week wherein they netted $90,000 in scholarship money for their students in 1994. She also discusses the industry support that has allowed for the Gladys Marcus Library to purchase relevant materials as well as the funding brought in by the Action Council to build the Annette Green Fragrance Foundation Studio in 1994. She talks about changes in the curriculum over time and how she remains connected to the Industry to stay current. The department had recently added a fine arts course, a social science elective, and now requires French. Smith is hoping the department will be removed from their larger marketing umbrella so that they can continue their growth. Smith states that their industry has always been globally-minded, given that essential oils are sourced from all over the world. Each year they take their students on a summer study in the United Kingdom and France. Smith details their site visits at Estee Lauder, Revlon, Givenchy, Hermes, and L'Oreal as well as visits to family-owned essential oil houses in the south of France. Thanks to further grants, most of their students are able to go on this trip. Smith then talks about the demographics of her students and alumni placement. Finally, she discusses changes in the industry and the cosmetic industry’s need to diversify their market. 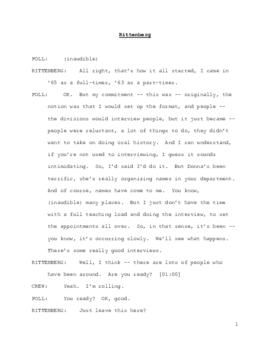 Dean Emeritus at the Department of Business and Technology at the time of this interview, Jack Rittenberg discusses his many roles while at FIT between the years of 1963 and 1992. He talks of the development of degrees within the baccalaureate program such as those in advertising and menswear, the latter being a degree that Rittenberg co-developed with Ted Roberts. He talks extensively about the school’s early existence in the C Building and the growth of the physical campus as FIT became more than a commuter school. Rittenberg remembers the building of the library and how space for the clothing collection allowed them to split from a storage arrangement with the Brooklyn Museum. Formerly a buyer for Bond Stores, Rittenberg has enjoyed showing FIT’s collections off to friends and visitors. Though Rittenberg was retired at the time of the interview, he was still teaching a spring merchandising course as well as industry seminars. He talks about strong relationships with alumni of the school and how retirement has allowed him to keep in touch with many of them through travel. Rittenberg talks about the faculty tendency to continue to work in the Industry so as to remain current. He also discusses the uniquely driven nature of the FIT student body. Rittenberg then goes into detail about the liberal arts program and gives a deep history of the founding and development of FIT from its roots as the Central High School of Needle Trades. He briefly discusses international students and changing demographics of the school and then launches into a discussion of the evolution of attitudes within the industry in regards to race and sex. The interview ends with a brief discussion of the decline of the fur industry.