The collection includes Claire McCardell's sketches and illustrations as a student, as well as sketches, newspaper and magazines clippings, correspondence, advertisements, invitations to fashion-related events and original photographs from her career as a fashion designer.

The Bergdorf Goodman Custom Salon sketches collection contains 8,976 pencil, ink, and watercolor sketches by staff artists representing clothing and millinery available in Bergdorf's custom salon. These garments were made to order either from designs purchased by special arrangement from the leading coutouriers of the day or from sketches by Bergdorf's then well known in-house designers. Representative designers include Dior, Balenciaga, Halson and Courreges. House designers include Leslie Morris, Mary Gleason, and Bernard Newman. There is a complete run from 1950 to 1969. In addition, there is a representative sampling of sketches from the 1930s and 40s.
In addition to the sketches, the collection contains preliminary manuscripts and galley proofs of Booton Herndon's book Bergdorf's on the Plaza (NY: Alfred A. Knopf, 1956) as well as typescripts of his interviews with and about members of the Goodman family and with and about such key members of the staff as Ethel Frankau, Odna Brandeis, and house designers Bernard Newman, Leslie Morris, and Mary Gleason.
The last series contains the original finding aid for the collection.

Miscellaneous fashion plates, sketches, and photographs from various sources. The fashion plates from unknown or miscellaneous publications consist of various styles and techniques of printmaking in both color and black and white. Fashion sketches in pencil, marker, or watercolor on paper represent designs available from department stores and miscellaneous designers. The fashion photograph series includes people in fashionable dress for varying purposes, including advertisements.

In this interview, Anka reflects on her career as a professional model, working first in Paris and then the Unites States during the 1960s and early 1970s. Anka begins by discussing her heritage and family background, and her childhood in Egypt. Anka explains how she began modeling when she was 17 years old and recounts beginning her career as a model working in Paris with many notable 20th century fashion photographers. Anka discusses meeting Eileen Ford in Paris and how Ford took Anka under her wing once she moved to New York in 1959. Anka reflects on her experiences living with the Ford family and working as a Ford model, mentioning key bookers and agents who worked with her in New York. Anka discusses meeting, dating, and marrying singer Paul Anka, retiring in the early 1970s, and raising 5 daughters. Guided by Sicular, Anka reviews her portfolio and shares stories surrounding a few of her favorite photographs and photographers. Sicular makes a point of focusing on Anka’s composite card (13:50), explaining how in a pre-digital industry the card functioned as model’s primary means of promotion. At the end of the interview, Anka speaks on the phone with her former booker, Rusty Donovan Zeddis.

This collection contains correspondence, newsletters and Bargaining Agreements pertaining to the operations of the United College Employees of FIT union.

Conducted by Estelle Ellis in the late 1980s into the early 1990s, this is a series of interviews of executives who worked for Saks Fifth Avenue throughout the 20th century. Interviewees discuss the goals of the store's president, Adam Gimbel, others they worked with, and the fashion retail industry, and the various experiences they had while working for Saks Fifth Avenue. 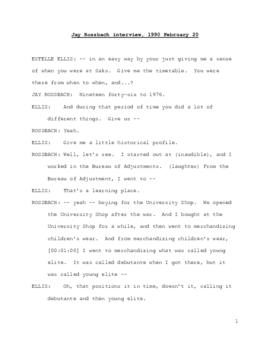 Estelle Ellis interviews Saks Fifth Avenue's former Senior Vice President Jay H. Rossbach, Jr. about his time at Saks Fifth Avenue, including the goals of Adam Long Gimbel for the department store as well as the names of those who worked for Saks at the time.

In this 1989 interview Estelle Ellis interviews Paul Leblang about his time as a Senior Vice-President and Marketing Executive at Saks Fifth Avenue. They discuss the evolution of Saks' folio (or catalogue) business; the creation and implementation of the Fifth Avenue Club; the need for Saks to expand beyond the purview of evening wear; and how a store must expand while still maintaining consistent quality control. They touch upon the changing roles of women in society and how stores must adapt to this generational shift and how the oversaturation of retail stores in American society led to the closure of many of the retail greats, including Bonwit Teller.