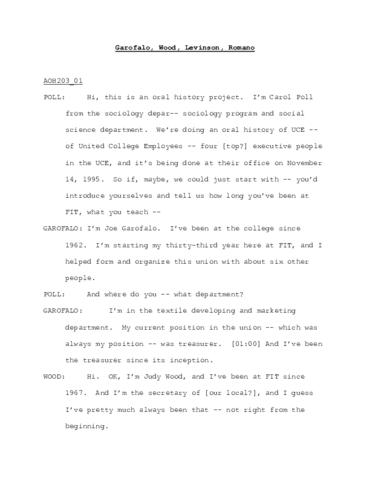 Joseph Garofalo was a professor of textile science at the Fashion Institute of Technology in NYC for over 40 years. He was also a trustee and treasurer of the Federal Teachers' Credit Union, as well as treasurer of the United Federation of Teachers.

Immigration attorney Judith L. Wood, has championed immigrants' rights for families and has persecuted individuals troughout the world for over 35 years.

Juliette Romano is a professor in the Career and Internship Center at the Fashion Institute of Technology and is the president of the United College Employees of FIT/SUNY. She was a member of the UCE/FIT negotiating committee and also served as assistant secretary of the executive committee. She served as vice president for contracts and grievances for seven years, and then became the local's executive vice president. Juliette has served as president of her local since 2005.

Carol Poll was a professor of sociology at FIT and interviewed members of the FIT community for the FIT 50th Anniversary oral history series.

Aug 2018: A VHS cassette was found in the library labelled as being this interview. We only have a digitized audio version of this interview. The VHS tape needs to be viewed to confirm whether or not it's the same interview, or something supplemental.
VHS labelled: No. 23