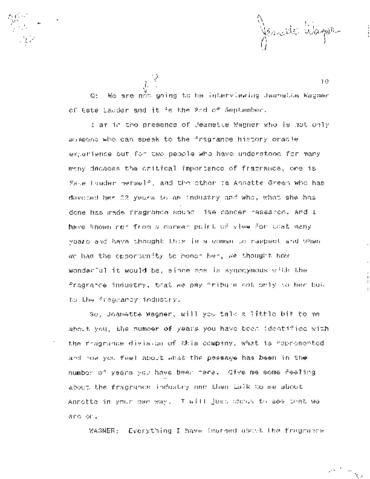 Jeanette Wagner studied at North Western in the late 1940s. She became a journalist and landed a position at the Hearst Corporation. Her job was to run the international division of the Corp. and starting all of their international magazines. She joined Estée Lauder in 1975.

Biography/current activities: Vice Chairman Emerita of The Estee Lauder Companies Inc., Jeanette Sarkisian Wagner’s career has spanned marketing and general management on both domestic and international fronts. She retired from The Estee Lauder Companies in January 2002. Prior to joining Estee Lauder in 1975, Mrs. Wagner held increasingly responsible editorial and management positions with The Hearst Corporation, including Editor-in-Chief of all International Editions, which she founded, and Director of New Ventures. She was the first female senior editor of The Saturday Evening Post, and an editor at The Chicago Daily News.

"Mrs. Wagner is an active worker on improving public school education in New York City and served as Secretary of the Board of the Fund for Public Schools through Mayor Michael Bloomberg’s term in office. The Mayor of New York City appointed her to the Boards of the Department of Cultural Affairs and New York City Center. Her many honors include a Lifetime Achievement Award from American Women for Economic Development and the “Women Who Inspire Us” honor from the Harvard Business School Network of Women Alumnae."

Digital and written notes indicate that this interview was originally part of a larger recording that includes the James Preston, Jeanette Wagner, and Lawrence Aiken interviews (legacy audio object ID AOH180 and AOH180a), however the recordings only have the interview of Lawrence Aiken.