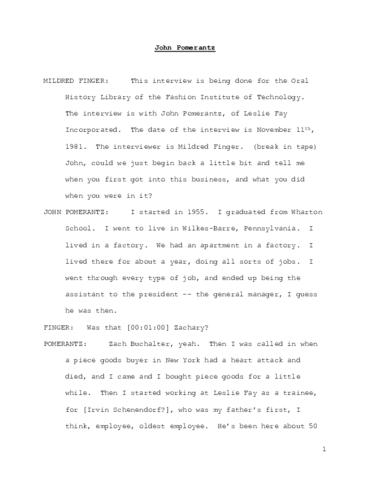 John J. Pomerantz, president of JJP Advisory, LLC, is former chairman and chief executive officer of Leslie Fay Company, Inc., a manufacturer of women's fashions. Pomerantz retired in 2000 after more than four decades with the company. Pomerantz joined Leslie Fay in 1955, became president in 1971 and chairman and CEO in 1980. At the 2002 American Image Awards, the fashion retailing world honored him for nearly three decades at the helm of one of the country's oldest dressmakers. Pomerantz is a trustee emeritus of FIT, and was a director of its foundation from 1976 to 2010, serving more than ten years as chairman. In 1984, Pomerantz and his wife, Laura, donated $1 million to help launch FIT's $5 million development campaign. In recognition, FIT named its Art and Design Center in honor of his father, Fred P. Pomerantz, founder of Leslie Fay. Pomerantz is a founder and supporter of Albert Einstein College of Medicine and serves on its board of overseers. He supports the arts and is involved in community service, including the Boy Scouts, where he was past chairman of the Greater New York Council. He sits on the executive board of City Meals-on-Wheels. Other board memberships include UJA Federation of New York, Fashion Delivers, and Bachmann-Strauss Dystonia & Parkinson Foundation. Pomerantz graduated from Admiral Farragut Naval Academy in 1951, and earned his BA from the Wharton School of the University of Pennsylvania. The Pomerantz family includes Johns wife Laura, daughters Andrea Pomerantz Lustig and her husband Mathew, Susie Davis and her husband Kevin, and Marnie Pomerantz MacLean and her husband, Neil. He has five grandchildren, Anna, Michael and James Lustig, and Chelsea and Zachary Davis.