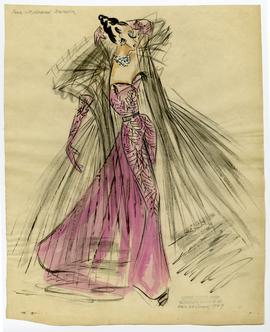 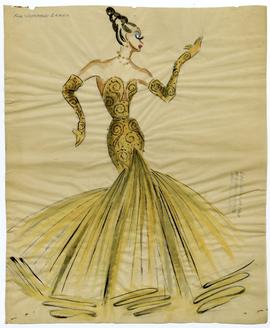 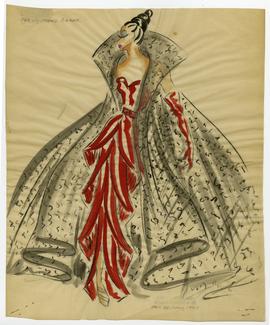 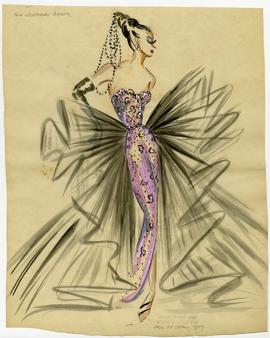 Primary sources are conflicting as to whether half-French, half-Cuban Eric de Juan was born in Cuba or France, but ancedotal evidence suggests he spent time as a youth in both, being educated mainly in France. At the age of 15 he dismayed his parents with the proclamation that he intended to become a couturier. As the son of a wealthy family, he was expected to take over his father's successful import business. His grandmother— "a great French lady,"—felt differently, and backed her grandson's dream whole-heartedly, converting a portion of her sumptuous home into a workroom and salon for him. Perhaps fleeing from the Nazi occupation of Paris, sometime around 1939, de Juan established a couture house in Cuba, where he became known as the "Mainbocher of Havana." Here he says, "I was very spoiled there...It got so that I could choose my own customers," from the the millionaire glitterati who flocked to the popular resort destination during the 1940s and 1950s. After being jailed six times by Castro for his "association with wealthy clients," and having his business and property seized by the state—his home was converted into the Soviet Embassay—de Juan fled to the US in February of 1964. de Juan's first job stateside was with the noted 7th Avenue coat and suit manufacturer Ben Zuckerman. Three years later, de Juan would replace Leslie Morris as the inhouse designer for the Bergdorf Goodman custom salon; perhaps his friendship as a youth in Cuba with Nena Menach, who was to become Mrs. Andrew Goodman facilitated this opportunity. This arrangement was not to last long; the custom salon would close its doors for financial reasons in May of 1969. de Juan remained on at Bergdorf's for a short period, designing for the store's Plaza Collection. By the mid 1970s, de Juan had left New York for sunnier shores, setting up a custom shop on Seaview Avenue in Palm Beach, Florida. Socialites and heiresses would rely upon him for day and evening looks as well as the wedding gowns of their daughters until at least the mid-1980s. The full extent of de Juan's operations in Florida is unclear, but at this point he had been working in the fashion industry for at least five decades. Information regarding date of death cannot be found.