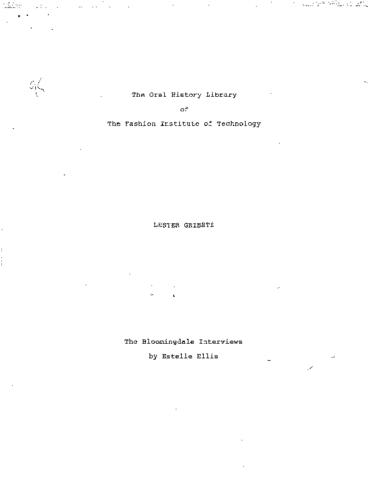 Lester Gribetz joined Bloomingdale's in 1953 on the executive training program and spent most of his career in the company's home furnishings department. Gribetz became Senior Vice President of Home in 1977, General Merchandise Manager of Home and Cosmetics in 1979 and Executive Vice President and General Merchandise Manager of Home, Cosmetics and Restaurants in 1980. In 1989, he was named Vice Chairman with added responsibilities for special merchandising projects including private-label marketing and the men's division. Gribetz left Bloomingdale's in 2004 to work for Macy's, which was owned by the same parent company as Bloomingdale's. At the time of this interview, Gribetz had worked under Marvin S. Traub for his entire Bloomingdale's career thus far.

There is a lot of unrelated and sort of messy audio at the beginning of this file, the conversation really begins 25 seconds into the recording. This is also a fairly "fuzzy" recording with a lot of air noise as well as actual background city noise. There are a number of points where the transcript does not include all of the audio but the listener is likely able to determine what is being said, especially between 7:50 and 9:20.At 23:12 the audio sort of cuts out and Ellis and Gribetz say goodbye but then the recording picks up again with almost another ten minutes of interview. Finally, at 31:11 the transcribe starts to read "Well I know Elizabeth (?)... interior design course," I believe he is actually saying "Well I know A LITTLE BIT ABOUT THE interior design course.

This was originally part of a larger recording that includes the Terry Schaefer interview.