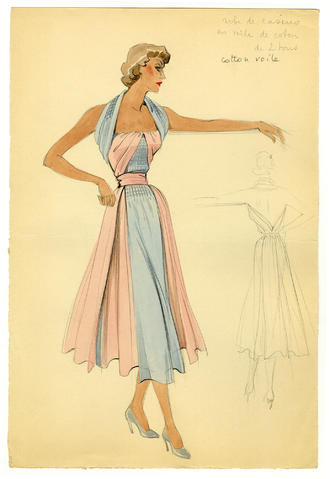 Born in 1898 in the Bordeaux region of France, Lilly Daché received her millinery training under the famed Parisian milliners Caroline Reboux and Susan Talbot. In the early 1920s, she made her way to the United States and by 1924 had become part owner of The Bonnet Shop, which was eponymously named after the departure of her partner, shortly into the venture. The 1930s saw the business find great success with many Hollywood actresses patronizing the talents of the House of Daché. In 1931, Daché married COTY vice-president Jean Despres, in whom she found a warm and supporting partner through out her life. In 1940, Daché received the Neiman Marcus Award and the following year the Coty American Fashion Critics Award. The 1940s would also see her offer cosmetics and clothing to her clients as well as imported couture models of clothes and hats from Paris. When the demand for hats declined in the 1960s, Daché opened a hair salon on her premises and also sold wigs. In 1968, at the age of 73, Daché retired and liquidated her business assets. She died in Louvecienne, France in 1989. One of the many illustrious protegées who trained under Daché was Halston, who left her employ in 1958 to take the job of milliner for Bergdorf Goodman.

This folder contains ten 9 x 12 3/4" pencil and watercolor sketches of dresses, hats and coats. Many sketches accompanied by fabric swatches.