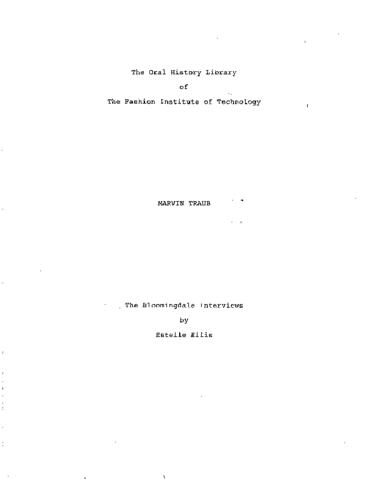 Born on April 14, 1925 in New York City, Marvin S. Traub was a key figure in the retail industry of the mid to late 20th century. He is best known for turning Bloomingdale's Department Store into an upmarket, fashion forward cultural center and taking it from a $65 million dollar business in 1950 to a billion dollar business in 1987. Before starting at Bloomingdale's, Traub graduated from Harvard's undergraduate college and then Harvard Business School. Traub also served in WWII and in 1948 he married his wife, Lee (n

Sound quality is really bad on this and all of the Marvin S. Traub recordings. Voices are very quiet, with a litte bit of an echo and there is a lot of air noise.

At 38:24, a totally separate interview begins with Estelle Ellis interviewing two men- not sure who these are