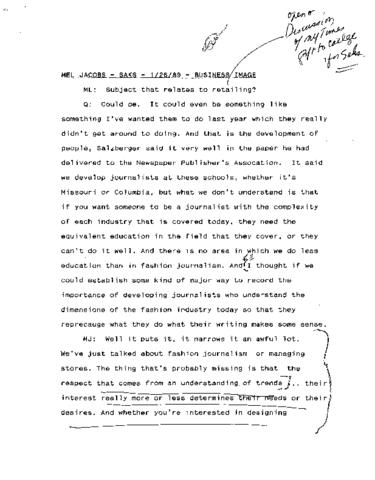 Melvin Jacobs started his career as an assistant in the bargain basement at Bloomingdale's. He rose through the ranks of merchants at Bloomingdale's, ultimately becoming a senior vice president and general merchandise manager of the chain during his 25 years at the store. In 1972, he was appointed president of Burdine's, a Florida-based department store chain owned by Federated Department Stores Inc. Federated later brought him into its corporate offices in Cincinnati as a vice chairman, but in 1982 he moved to join Saks Fifth Avenue as its chairman and chief executive. Just before he retired, Jacobs had joined the board of QVC Network Inc. While retired, he started a retailing and investment company called Retail Options Inc. with Kenneth Walker and the former president of the Limited Stores, Verna Gibson.