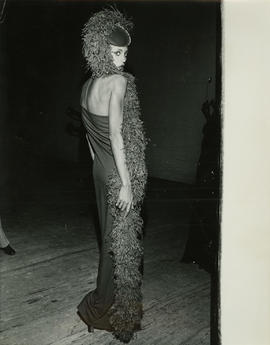 Nancy North was a model for Halston beginning in 1972.

William J. Cunningham, more commonly known as Bill Cunningham, was an American street photographer. Cunningham was born on March 13, 1929 in Boston. In middle school, Cunningham began creating hats out of objects found in dime stores. He was given a scholarship to Harvard but dropped out after only two months. He accepted an offer to move in with his uncle in New York, who hoped to persuade Cunningham to drop fashion and become interested in the family's advertisement agency. Upon receiving the ultimatum "stop making hats or move out," Cunningham left his uncle's apartment, relocating to a small ground-floor apartment on East 52th st. In addition to making hats, Cunningham briefly held a freelance position at Women's Wear Daily but quit in the early 1960s. In 1967, Cunningham got his first camera. He began taking photography assignments from "The Daily News" and "The Chicago Tribune." By the late 1970s, Cunningham was a regular contributor to the New York Times. Although asked several times by a number of newspapers and magazines, Cunningham refused to take a staff position. It was only after being struck by a truck while on assignment that Cunningham considered the Time's offer, stating that it was "a matter of health insurance." In 1993, the Council of Fashion Designers honored Cunningham, who biked onto the stage to accept his award. Cunningham was invited to Paris in 2008 to accept the French Legion of Honor. Bill Cunningham was the subject of a 2010 documentary "Bill Cunningham New York." Bill Cunningham passed away in June of 2016.

Born Roy Halston Frowick in 1932 in Des Moines, Iowa, the fashion designer who went as simply 'Halston' moved to Chicago in 1952 where he took a job as a window dresser for the Carson Pirie Scott department store. In 1958, he moves to New York to work for the preeminate milliner Lilly Daché before taking a job designing millinery for Bergdorf Goodman. In 1966, Bergdorf Goodman sponsored Halston's first ready-to-wear clothing line which had its own boutique within the store. He leaves Bergdorf in 1967 and launches his own line the following year which was an immediate success; he won COTY Awards in 1969, 1971 and 1972. In 1973, Halston signs licensing deals with Norton Simon. Halston and menswear lines were launched in 1975.

During this period, Halston is at the epicenter of a glittering social circle, frequently attending Studio54 beginning in 1977 with the likes of Andy Warhol, Liza Minelli, Mick and Bianca Jagger and his coterie of models dubbed 'The Halstonettes.'

Diffusion lines were launched with J.C. Penny's in 1983 and the following year, Halston unsuccessfully attempts to buy his company back from Norton Simon; Halston Originals closes in 1985 and the following year Haston receives the news he is HIV positive. He passes away from AIDS related complications in 1990.

The Department of Special Collections and College Archives does not own copyright for all material held in its physical custody. It is the researcher's obligation to abide by and satisfy copyright law (http://www.copyright.gov/title17/92chap1.html#108) when copying or using materials (including digital materials) found in or made available from the department. When possible, the department will inform a researcher about the copyright status of material, the researcher's obligations with regard to such material, and, wherever possible, the owner or owners of the copyrights. Any and all reproduction of originals is at the archivist's discretion.