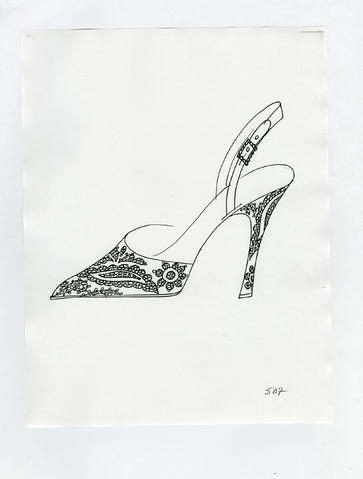 Arsho Baghsarian was born in Turkey to Armenian parents and immigrated to the United States in 1957, during her teen years, eager to study design. She would receive her Bachelor of Fine Arts degree with honors in fashion design From the Pratt Institute in New York in 1962.
That same year, after she competed in a competition for best student fashion design among the top ten fashion students in the country and received the prestigious annual N.Y. Fashion Designer Celanese Award, Baghsarian briefly designed sportswear on 7th Avenue. However, a phone call from former professor Laura Tosato Busgang was the catalyst that caused the young woman, who during adolescence had cut out and laced cardboard soles with bright ribbons, to begin what would become a successful career spanning more than forty-five years in the footwear industry. The phone call concerned a position with Genesco that was designed to reinvigorate it Christian Dior, a position Baghsarian gladly accepted in 1963. Six months later the Christian Dior division of Genesco merged with I Miller, another division of Genesco. Baghsarian took over design for the new label until 1969. Before leaving the label and pursuing other projects within the footwear industry, Baghsarian received the Pellon Award, as well as won the Leather Industries of America’s American Shoe Designer Award in the women’s best footwear category in 1968.
From 1969 to 1971, Baghsarian designed for Andrew Geller’s Etcetera & Adlib lines. After she teamed up with Jerry Miller and helped design his Margaret Jerrold and Shoe Biz lines. (Jerry Miller’s grandfather founded I. Miller, which he worked for until I. Miller was bought by Genesco and he started his own line.) She credits her fifteen years at the company as having a huge influence on her career years at the company run by Jerry Miller—credits him as having huge influence on her career since Miller’s Margaret Jerrold, Shoe Strings and Shoe Biz lines had her creating footwear in factories around the world from Spain to Italy to France and even becoming the first company to make fashion sandals at a price in mainland China. Miller was so impressed by Arsho’s work he created the Arsho for Shoe Biz label. The title of the line was fitting for a designer who did not remain behind the scenes and preferred instead to present her designs at trunk shows, such as at Lord & Taylor and Bonwit Teller and be on a first-name basis with customers.
In 1986 until 2008, Baghsarian designed for Stuart Weitzman & Company. During this time she also designed a couture line under the Arsho label, however, her talent led to Weitzman awarding her the label Arsho for Stuart Weitzman. She became the first full-time designer he collaborated with on his collection, which was not limited to casual stretch shoes, thongs, sneakers, mules, clogs, fur and mouton boots, bridal shoes and evening footwear complete with with pave stones and jeweled architectural heels. Within the company, Baghsarian was able to fully express her creativity, whether displaying her affinity for whimsical designs or her taste for glamor.
In January 2008, Baghsarian retired from the footwear industry and was inducted into Footwear News Hall of Fame. She now divides her time between Manhattan and Southhampton with her husband of more than forty years, fashion photographer and sculptor Avedis Baghsarian. Despite her retirement, she admits she will never stop designing.