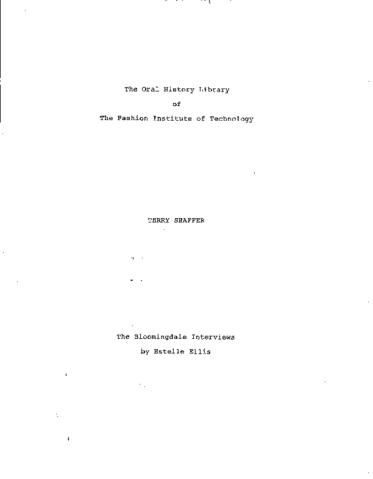 Terry Schaefer was the Vice President of Marketing at Bloomingdale's in 1986. His professional career began after finishing his MBA at University of Texas and starting in marketing at Doyle, Dane & Bernbach (DDB) in 1972. After working on a number of different brands including Chanel, Schaefer left DDB for the position of Senior VP of Marketing at William Filene and Sons.

"Mr. Terron E. Schaefer, also known as Terry, served as Group Senior Vice President of Marketing at Saks Fifth Avenue Inc. Mr. Schaefer served as the Chief Creative Officer and Executive Vice President at Saks Incorporated until November 4, 2013. He served as Group Senior Vice President of Creative & Marketing of Saks Inc., from February 2004 to September 2006. He serves as Senior Executive Officer of Saks Fifth Avenue, a Division of Saks Inc. He served as Worldwide Creative Director of Simon Property Group from September 2003 to February 2004. He was the Co-founder of style365.com and served as its Co-Chief Executive Officer from August 1998 to July 2002. He served as Senior Vice President, Marketing - Worldwide Retail of Warner Brothers from 1995 to 1998. His marketing career spans over 30 years and includes a wealth of international retail experience. Mr. Schaefer served as Senior Vice President, Marketing, Worldwide Retail of Warner Bros., with responsibility for international marketing and brand development from 1995 to 1998; and from 1988 to 1995 his retail marketing experience included leadership positions at Macy's West, Galerias Preciados, Harrod's, Bloomingdale's, and William Filene and Sons. Mr. Schaefer began his marketing career at Doyle Bane Bernbach where he served as Vice President of International. While there, he formulated advertising strategies and supervised creative development for H.J. Heinz, Polaroid, Chanel, and Procter & Gamble and opened offices in Tokyo, Hong Kong, and Sydney. He has been awarded two prestigious Gold Lions at Cannes for the world's best television advertising campaigns. Mr. Schaefer received both his undergraduate and MBA degrees from the University of Texas." -Bloomberg Executive Profile

Estelle Ellis was born on November 12, 1919 in Brooklyn, New York. After graduating from Hunter College in 1940, with a Bachelor of Arts degree in Political Science and a minor in Journalism, Ellis began a career in publishing. Ellis was crucial in the founding of Seventeen magazine in 1943, assisting Helen Valentine with design and advertising for the magazine. In 1958, Ellis founded Business Image, Incorporated, a creative marketing firm that stressed the importance of market and product positioning. Her company worked primarily with Condé Nast publications but other businesses, such as Yves Saint-Laurent Fragrances, Evan-Picone, AT&T, and Scoville, hired Business Image as well. Beginning in the mid-1960s, Ellis began working with the Fashion Institute of Technology, creating programs and fundraising campaigns to help with financial support. During the 1990s, Ellis focused on writing, co-authoring At Home with Books: How Booklovers Live With and Care for Their Libraries (1995), At Home with Art: How Art Lovers Live With and Care for Their Treasures (1999), and The Booklover's Repair Kit: First Aid for Home Libraries (2000). Estelle Ellis passed away on July 12, 2012.

This was originally part of a larger recording that includes the Lester Gribetz interview.

All of the paperwork for this interview identifies Schaefer as "Terry," but the most common name by which Schaefer can be located through online searches is "Terron". There are also a few different spellings of his last name throughout the paperwork. Library of Congress uses Schaefer, Terron. https://lccn.loc.gov/n2007005357