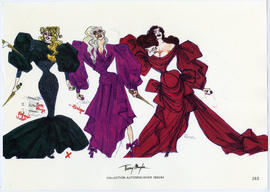 Born on December 21, 1948 in Strasbourg, France, Thierry Mugler is known for his highly structured, yet body-conscious garments. His avant-garde runway shows and provocative futurist collections are the defining characteristics of his brand. At age 24, Mugler moved to Paris where he worked as a window dresser for the boutique Gudule, and began designing on the side, eventually branching out to freelance work. Mugler created his first collection in 1973 entitled “Cafe de Paris” and in 1992, his first fragrance, “Angel,” the same year in which he debuted his first haute couture collection. Mugler has also published fashion photography books and short films which he directs himself. In 2003 the fashion division of Thierry Mugler was closed due to business losses. The fashion house was revived in 2008, in part due to the popularity of his pieces featured at the Superhero’s: Fashion and Fantasy exhibition at the Metropolitan Museum of Art in 2008. Despite the revival of the house, Mugler himself has ceased to design for his eponymous label. However, most recently, Mugler designed Kim Kardashian West’s outfit for the Met Gala in 2019.

15 sketches of both women’s wear and men’s wear reproduced in color. The sketches are dated from Fall/Winter 1982/83 to Fall/Winter 1992/93 and represent some of Mugler’s sportswear and eveningwear lines.

The Department of Special Collections and College Archives does not own copyright for all material held in its physical custody. It is the researcher's obligation to abide by and satisfy copyright law (http://www.copyright.gov/title17/92chap1.html#108) when copying or using materials (including digital materials) found in or made available from the department. When possible, the department will inform a researcher about the copyright status of material, the researcher's obligations with regard to such material, and, wherever possible, the owner or owners of the copyrights. Any and all reproduction of originals is at the archivist's discretion.

The Library's catalogue record for this collection: https://fit.sunyconnect.suny.edu:4699/F?func=direct&doc_number=000088723